Caves in the Southeast are treasure troves of historic artifacts that need to be protected and preserved. Our caves contain prehistoric jaguar bones, remains of salt-peter mines, thousands of Civil War signatures and Native American drawings. One of our most significant preservation projects is the Cherokee Syllabary in Howards Waterfall Cave. 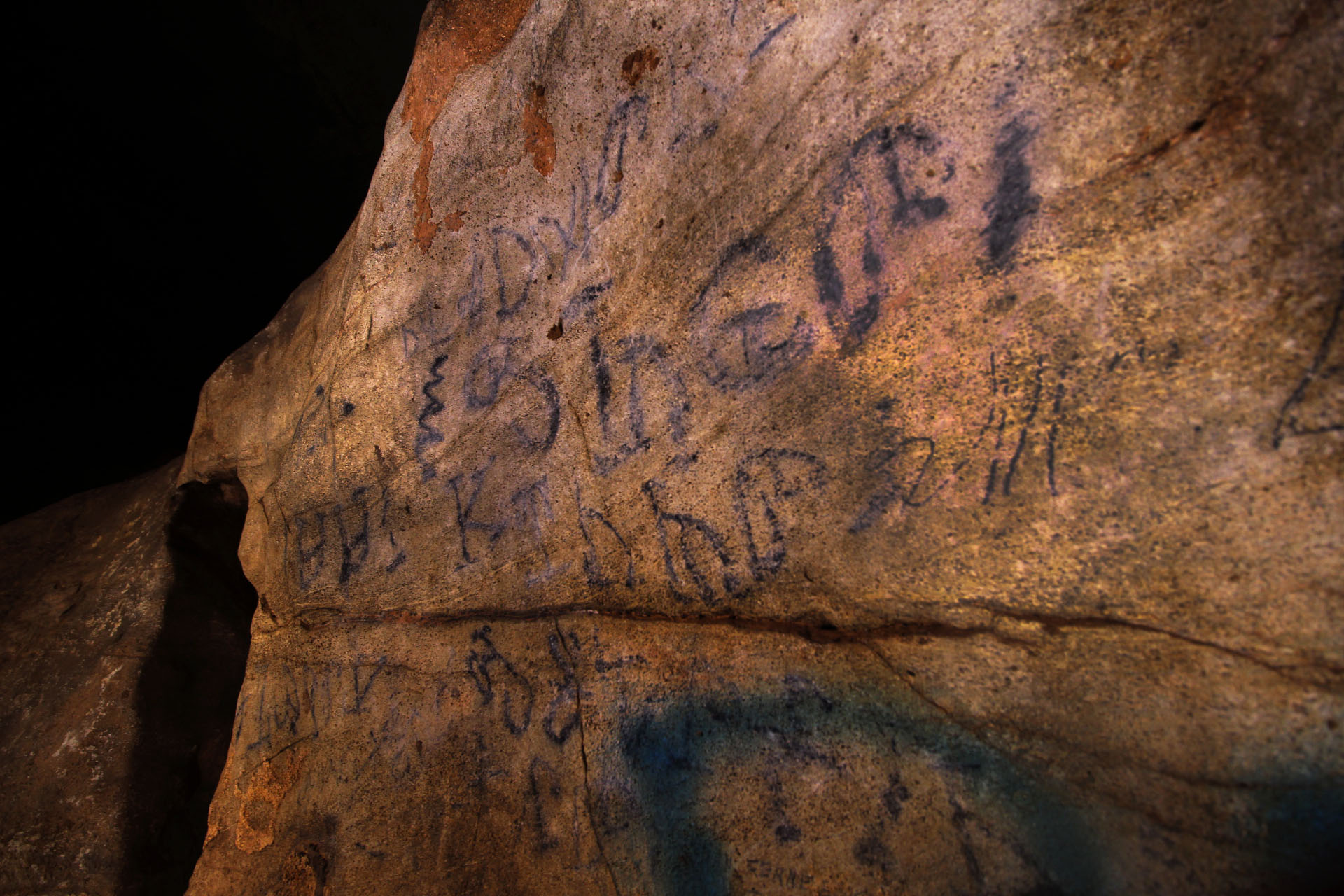 Inside Howards Waterfall Cave, you will see a large steel gate built to protect a small area of the cave on the left as you exit the entrance crawl.  This area, only perhaps one hundred feet deep,  contains  panels of wall inscriptions written in the Cherokee Syllabary.  The Southern Cumberland Plateau, including the area around Trenton, Georgia, is a part of the homeland of the Cherokee, and the Syllabary was invented in the early 1800’s not far from here, by the renowned Cherokee scholar Sequoyah.  Sequoyah was born in East Tennessee but he immigrated to the Cherokee community Willstown (Ft. Payne, AL), where he began development of the Syllabary sometime after 1800; the system became the official way of writing for the tribe by formal Cherokee Nation declaration in 1828.  Within months of its adoption, a majority of Cherokee people were literate.  The Cherokee Syllabary is one of the few examples in the world of a preliterate culture intentionally creating an original and effective writing system .   There are few examples of Syllabary written close to the time of its invention, but one of those examples is here in Howard’s Waterfall Cave. It was first identified by Alan Cressler in December 2014.

Before SCCi took ownership of Howards Waterfall Cave, the syllabary suffered from vandalism. The syllabary area is heavily spray painted and part of the main syllabary panel itself is obscured by paint. The section of the cave housing the syllabary has been gated to protect these important cultural resources.  Access to this section is provided to researchers and special groups with permission and escort.

The gating project was made possible by funding from the Eastern Band of Cherokee Indians, US Fish and Wildlife Service, The Conservation Fund, and Transcontinental Gas Pipeline Company.

Ongoing research on the Cherokee Syllabary is being led by Dr. Jan Simek, Distinguished Professor, Department of Anthropology, University of Tennessee-Knoxville.