Caves are formed by the dissolution of limestone.  Rainwater picks up carbon dioxide from the air and as it percolates through the soil, it turns into weak acid.  This slowly dissolves out the limestone along the joints, bedding planes and fractures, some of which become large enough to form caves. The illustration to the left is a general model of cave formation in limestone with natural openings and the dissolution by slightly acidic groundwater.

Precisely what kind of cave forms is partly determined by gravity.  Water wants to go down.  Just as rivers on the Earth's surface low toward the sea, caves are pipelines for water to move from one place to another.

If the water takes a fairly direct route, the land forms what are called pit caves with vertical shafts stretching straight down into the rock.  If the water takes a more circuitous route, a horizontal cave system is formed. Mammoth Cave, in Kentucky, a horizontal cave, is the longest cave system in the world , stretching for at least 390 miles (627 kilometers) beneath the surface of the Earth.  (Southeastern Cave Conservancy actually owns an entrance and a small part of the Mammoth Cave System.)

Caves of the Southeast

Many of the most beautiful caves in the Southeast are present in limestone that was deposited in a relatively shallow sea more than 300 million years ago during the Mississippian Period.  From oldest to youngest, these limestone formations are the Tuscumbia (St. Louis), Monteagle, and Bangor formations.  All together, they are about 500 feet thick. 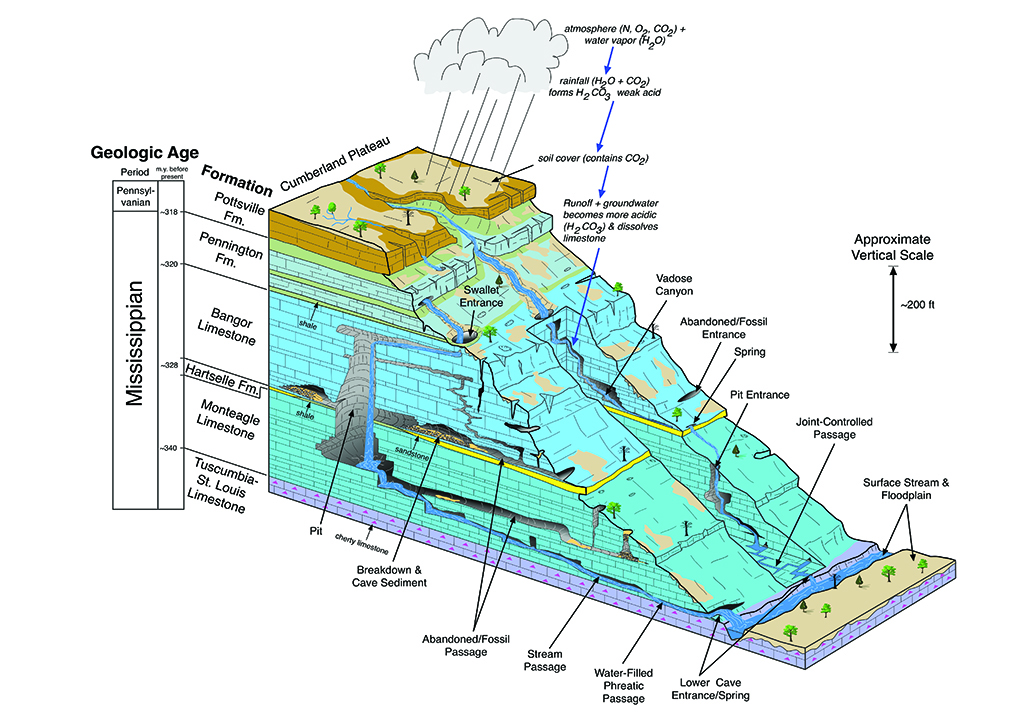